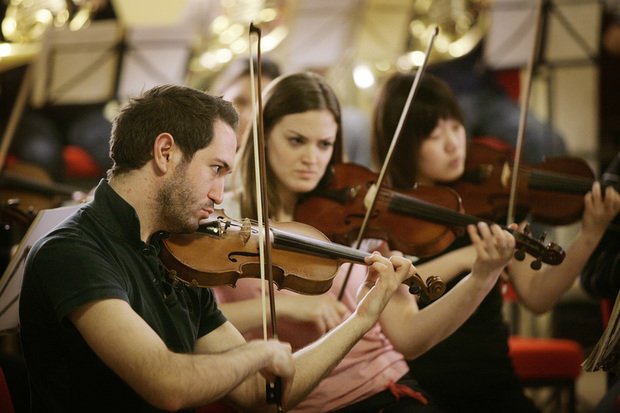 Docklands Sinfonia is a young and exciting symphony orchestra which has become a major cultural force in London’s dynamic Docklands.

Since its formation in January 2009 by musical director Spencer Down, the orchestra has enjoyed incredible success with performances at Buckingham Palace for the Queen and at the Royal Albert Hall and the House of Lords.

In November 2010, Docklands Sinfonia performed the world premiere of Grammy award winner Imogen Heap's 'Love The Earth' to a sell-out audience at the Royal Albert Hall. The event was live-streamed over the internet to over 400,000 people worldwide.

In May 2011, the orchestra was honoured to perform a special concert for the Queen to celebrate youth in the arts in the ballroom at Buckingham Palace in front of a 500-strong celebrity packed audience. Docklands Sinfonia played alongside artists from the English National Ballet, Royal Opera House and National Youth Theatre as well as pop stars Joe McElderry, Rumer, DJ Ironik and Sara-Jane Skeete.

Docklands Sinfonia prides itself on innovative and creative programming. The orchestra has recently collaborated with children's author James Mayhew for a unique performance of The Nutcracker and commissioned a brand new ballet 'Momento' by Jeremy Holland Smith.

Docklands Sinfonia is also proud to be working with the Hackney Learning Trust and Hackney Borough Youth Orchestra in an educational project to help promote classical music in the East End of London.

The orchestra is thrilled have appeared at Chelmsford's prestigious M&G civic concert series. Other recent concerts include performances at Cadogan Hall and the Claygate Music Festival.

Docklands Sinfonia is a registered charity (Number 1147781) and is honoured to have Admiral Lord West as its patron. It rehearses on Wednesday nights from 7pm to 9:30pm at St Anne’s Church, Limehouse.