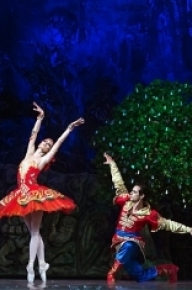 National Ballet Sofia celebrates its 80th anniversary. The first professional Bulgarian ballet performance, Coppelia, set by Atanas Petrov, was given on February 22, 1928. This date is considered the founding date of the National Ballet Company, part of the National Opera Company since its establishment. Through the years of its development, the National Ballet has recorded a number of memorable triumphs, recognized in the enthusiastic reviews and commentaries by the most uncompromising judge - the world critics.

Ever since its first steps the Bulgarian ballet searched to fuse the Russian classical school and the German expressive dance movement.  And while Atanas Petrov presented its reading of the classical ballet works Coppйlia, Chopiniana, Raymonda, Die Puppenfee (The Fairy Doll), Giselle, Swan Lake, Esmeralda, as well as the first performance on a national theme Zmey i Yana (Dragon and Yana) by Hristo Manolov /1937/, during this period the remarkable adherent to the German expressive dance movement - Mariya Dimova, found a new way to construe  Bulgarian folklore in her productions of Nestinarka by Marin Goleminov /1942/ and German by Filip Kutev.

After 1945 the influence of the Russian classical school increased. Even ballets on national themes were choreographed by foreign, mostly Russian choreographers.

The National Ballet has performed entire productions and concert programmes at tours abroad with great success. Its participation in a number of international festivals is regarded with high esteem.