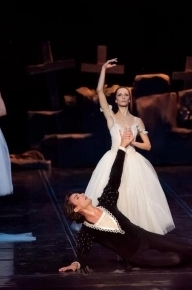 It was long time ago in 1949 but it feels so close that the production of "The Fountain of Bakhchisarai" opened the gates to an art called - BALLET. The founder-artist as well as choreographer Gjorgji Makedonski managed to fill the existing emptiness and introduce the poetry of the movement.
Gjorgji Makedonski set the foundations and launched the process that was prolonged by Nina Kirsanova and Aleksandar Dobrohotov, two high profile artists. The couple improved the artistic dimension of the new ensemble and the bravest and most talented entered the world of ballet art based upon the classic Russian ballet school.
The dancers were full of great love to dance and dedication to gain the dancing experience. The road to success goes through proper education, carefully chosen repertoire, and the great works of the classic ballet.
It took eleven years, from the establishing the ballet ensemble, to get to the officially recognized third position among the ballet companies in former Yugoslavia at the First Yugoslav Ballet Biennial in Ljubljana. [The first two places took Belgrade and Zagreb ballet companies originating from the beginning of the XX century, while the Slovenia (1912), Bosnia and Herzegovina (1946), and Vojvodina (1950) ballets were ranked bellow.]
The magic of creation attracted more and more devotees to this vision. New names appeared, new artists are created, and their performances expand horizons, combining the old with the new tendencies. The classic ballet technique and the elegance of the movements are colored by the aesthetics of the contemporary and modern dance expression.
New contemporary ballets are staged, ballets full of new elements and aesthetic forms. The repertoire is expanded by works of national music and ballet production composed by Smokvarski, Prokopiev, Proshev, Zografski, Lekovski, Ivanosvski, Brangjolica, etc. Thus, created is the room for new ballet artists interested in choreography, too. However, the newly created ambience provoked the classical dance to be neglected and that is the basics for the educative artistic choice for the MOB Ballet ensemble.
The Ballet renaissance started with the arrival of Yuri Myachin, Russian pedagogue. Using more developed and contemporary attitude he brought in the ensemble the spirit of the country considered to be the cradle of the classical ballet dance - Russia. Simultaneously he became spiritus movens toward the classics and classical ballet works.
The production of new dancers is permanent. The criteria are sharpened. The results and the successes of the past create new generation of ballet dancers aiming toward higher creative achievements. There are new ballet artists dominating the Macedonian ballet stage, as well the various ballet stages throughout Europe at ballet concourses and competitions.
Today, with than 50 years of growth, with thoroughly defined artistic appearance and with the reputation of high quality ballet ensemble, MOB Ballet is prepared to touch new summits.
Thanks to the cooperation with one of the most important choreographs, like: M.Krapivin (Russia), V.Jaremenko (Ukraine), D.Kljavin (Ukraine), E.Stebljak (Ukraine) and many others, that placed on stage the performances: ”Scheherazade”, “Raymonda”, “Swan Lake”, “Romeo and Juliet”, “Esmeralda”, “The Nutcracker” etc, and also Macedonian choreographers that placed on stage the modern performances: “Wild love”, “Underground”, “Me Isadora”, “Da nobis pacem” and many others.
Macedonian Ballet cooperates with soloists-guests from different national ballets all over the world and they always accept the invitation to take part in performances with the whole Macedonian ensemble.
Also the many international guesting gave contribution in the affirmation of Macedonian Ballet.
The exchange of ballet performances with the whole ensembles and with soloists-guests (couples) is just beginning of new cooperation.