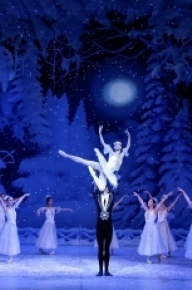 The Ballet of the National Theatre Brno is the second largest professional ballet company with a rich history and tradition in the Czech Republic. Thanks to a high professionalism and artistic quality of the Ballet NdB company there can be played a classical ballet repertoire, neoclassical choreographies and creations of contemporary dance styles. In the repertoire there are ballet titles like Swan Lake, The Nutcracker, Sleeping Beauty by Tchaikovsky, La Bayadére by Minkus or choreographies by Geroge Balanchine or Jiří Kylián.

Currently the Ballet of the National Theatre Brno has 50 dancers and 10 productions in its repertoire. Soloists of the Ballet NdB have won many prestigious awards that are presented to ballet artists in the Czech Republic such as the Philip Morris Ballet Flower Award and the Thalia Award. Ballet NdB has also often presented on artistic tours in many European countries and like the first Czech ballet professional company in Japan.

The roots of the National Theatre Brno stretch back to the 1890s. Now a grouping of three ensembles – opera, drama, ballet – it was one of the most progressive European theatres of the 20th century. It was here in 1938 that the premiere of Sergei Prokofi ev’s ballet Romeo and Juliet was given. It was also the venue for an impressive number of Leoš Janáček’s opera premieres: The Beginning of a Romance: (1894, conducted by Leoš Janáček), Jenůfa (1904), Katya Kabanova (1921), The Cunning Little Vixen (1924), Šárka (1925), The Makropulos Aff air (1926), From the House of the Dead (1930) and Fate (1958).

The theatre is also inextricably linked with the name of Bohuslav Martinů, as the National Theatre Brno gave eight world premieres and three Czech premieres of his works, including The Miracles of Mary (1935) and The Greek Passion (1962). The artistic level of the ensembles has been developed both by distinguished fi gures from Czech cultural life and fi gures of world renown: the outstanding conductor and expert on the works of Janáček František Neumann (from 1919 to 1929), the dancer and choreographer, soloist and ballet master of the Ballet Russe de Monte Carlo and the Original Ballet Russe Ivo Váňa Psota (with a break from 1928 to 1952), the legendary Czech conductor Rafael Kubelík (1939–1941) and one of the most acclaimed “Janáček” conductors of the 20th century František Jílek (1948–1978, recipient of the Prix Arturo Toscanini-Paul Vergnes for his recording of Jenůfa from 1979).

The second decade of the 21st century brought signifi cant changes in the direction and aesthetics of the National Theatre Brno, whose clear vision is to become a European ambassador for a progressive approach towards theatre – both at an artistic level and through the methods of communicating with and acquiring new audiences. Each year NdB productions attract over a quarter of a million visitors.

The three permanent ensembles (opera, drama, ballet) operate on three stages: at the Mahen Theatre (the fi rst theatre in Continental Europe to be lit entirely by electricity; capacity 547 seats), at the Janáček Theatre (the largest Czech opera theatre; capacity 1,055 seats) and at the Reduta Theatre (the oldest theatre building in Central Europe; the librettist for Mozart’s opera The Magic Flute, Emanuel Schikaneder, worked here from 1807 to 1809; W. A. Mozart and his sister Nannerl performed here in 1767; capacity 286 seats).

Each year the NdB presents 70 diff erent productions, 16–19 of which are premieres, and some 600 performances. It organises three international festivals: the Janáček Brno International Theatre and Music Festival, the Theatre World Brno (Divadelní svět Brno) festival of progressive theatre and the Dance Brno festival of contemporary dance and physical theatre. In addition to theatre performances, as the region’s most important cultural institute it also off ers concerts and a whole range of educational and outreach projects for children and adults. It has been a member of the Opera Europe platform since 2008.