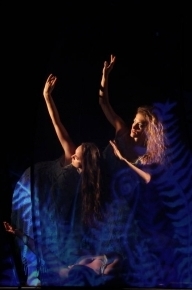 “Silent Tales” is a try along the help of the dance theater and the multimedia to create the visual worlds of two Bulgarian legends about wood-nymphs, united in a common plot.

The story of a wood-nymph whose magical power was taken by a young man so he could marry her is a motive taken from the Bulgarian mythology and it is the plot’s focal point for the performance.

The two different ideas represent life without rules and life in the society’s frames and their points of contact and a possibility for them to exist together with no compromises or not. These two ideas are the topic that concerns the creators of the performance.

Live performance with projections and animations open an opportunity for creating a fantasy world in which image and motion lead the story.

The performance is based entirely on Irfan musical band’s music, which is one of the small number of Bulgarian representatives of the musical flow World Music which has the typical mixing of musical motives of the national folklore and motives of the world musical heritage.

This project is a part of Varna’s Candidature for European Capital of Culture for 2019 and it is being realized with the financial support of Varna Municipality’s Fund “Culture”.