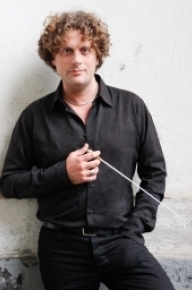 Andrea Tarantino was born in Syracuse in 1976 and began his musical studies in Naples, 1988.

Since 1997, as a violinist, he began playing in several orchestras such as the "Sinfonica di Viterbo", "Umberto Giordano" Foggia "Orchestra Sinfonica di Roma", "Orchestra Verdi Theatre in Salerno", "Nuova orchestra Scarlatti "in Naples," Ente Luglio Musicale Trapanese "in Sicily and since 2001 as a violist, he is the winner of many auditions in several prestigious Italian orchestras with which he has collaborated until 2010, among which there is the Orchestra of the Teatro Massimo of Palermo, Teatro Bellini in Catania (where he was also Concertino) Orchestra Symphonic Sicilian Palermo, the orchestra of the Arena di Verona, the Symphonic Orchestra of Rome.

He has also studied composition at the Conservatory S. P a Majella in Naples, and as a composer he wrote a lot of vocal chamber music, an Oratorio, a Passacaglia for violin and strings, a Padre Nostro for soprano, barythone and orchestra  , further than small symphonic pieces and a lot of music for the theater, among which there are the music for the theatral works "Pulcinelliade", represented in Europe and Russia, and "Taranterra."

As a conductor he made his debut with the orchestra of S. P a Majella Conservatory for the gala concert of the National Arts Award in 2010, after which his activity has seen him  participating again with the orchestra of San Pietro a Majella in 2012 and 2013 conducting the Symphony. 8 F. Schubert, the "Histoire du Soldat" by I. Stravinsky, the Symphony no. 29 by Mozart and "Ma mere l’Oye" by M. Ravel further than a series of concerts with S.P. a Majella string orchestra for a project on G.P. Pergolesi performed on 2010 at Napoli Royal Palace.

With the "Camerata Key Largo" Naples he has conducted several transcriptions from symphonic orchestra repertoire like the "Prelude à l’apres midi d’un faune" by C. Debussy and "Das Lied von der Erde" G . Mahler; with the same orchestra he has also Commissioned and conducted a lot of music written by young Neapolitan composers. In other countries he has conducted , in Bulgaria, the Theatre of Stara Zagora orchestra and Varna State Opera orchestra with the Symphony. 7 L.V. Beethoven, the Symponiy n. 39 by WA Mozart and Ouverture of "Don Giovanni" by W. A. Mozart, in Spain he also directs the Youth Orchestra KGSA in Madrid with the concerto. 3 for piano S. Rachmaninoff and in Belgium at Palais des Beaux-Arts he has conducted the ESMUC youth symphony orchestra of  Barcelona with Symph. Concertante for viola and violin by W. A. ​​Mozart.

He is for the 2014/2015 season  assistant conductor at the Opéra Royal de Wallonie in Liège where he has worked with conductors such Massimo Zanetti, Renato Palumbo, Paolo Arrivabeni, Patrick Davin, Jan Schultsz and Aldo Sisillo for the productions of "Gazzetta" by G. Rossini, "Maria Stuarda" by G. Donizetti, "Cenerentola by G. Rossini," Manon "by J. Massenet's" Luisa Miller "G. Verdi" Tosca "by G. Puccini and "Rigoletto" by G. Verdi.

Since July 2015 he is guest conductor at State Opera Stara Zagora in Bulgaria where he has debuted with Barbiere di Siviglia, performed on July and October 2015, and where he will be newly guested for Cavalleria Rusticana by P. Mascagni and “ La Giara “ by A. Casella in May 2016. In January 2016 he has conducted the  string orchestra of Bellini Opera theatre in Catania for a symphonic concert of 2015/2016 season and in March he will be guest conductor for a Lyric – Symphonic concert with the Sliven Symphony Orchestra in Bulgaria.

In May 2017 he has brought in France the Requiem by W.A. Mozart with the project "Requiem, le Divin Concert"; the tour will be repeated in May 2018, in fifteen locations in southern France. He has been, in 2017, Musical Director and Principal Conductor for the 3rd ETNAOPERAFESTIVAL headed by Simone Alaimo , where he has conducted La Traviata , by G. Verdi, and La Cenerentola , by G. Rossini.

In November 2017 he will be Assistant Conductor at the Plovdiv Opera for "Il Trovatore" by G. Verdi.